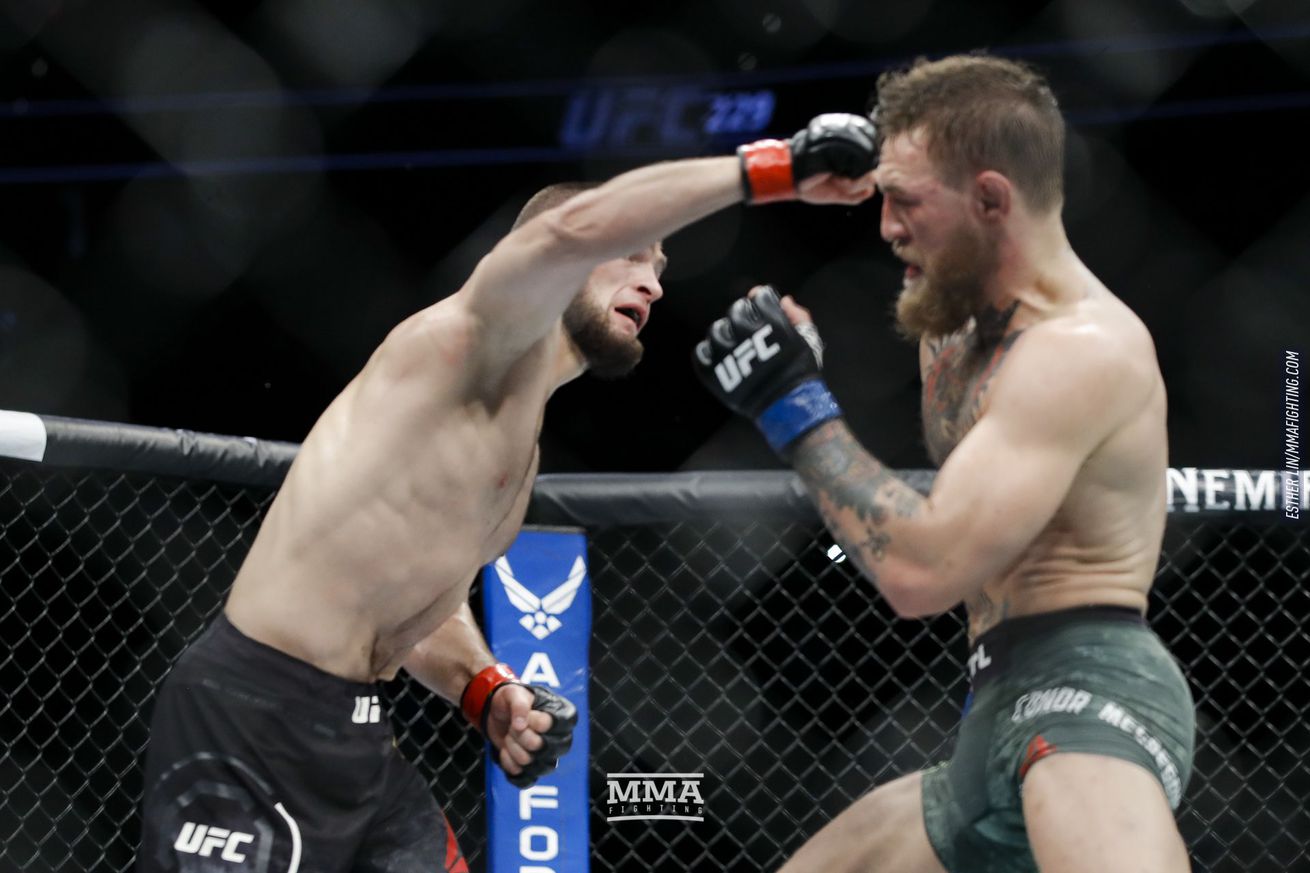 At a press conference in Moscow on Thursday morning, Conor McGregor announced that he will return to action on Jan. 18 at the T-Mobile Arena, Las Vegas, but the opponent he is set to face remained unnamed.

The Irishman has not contested a professional bout since his Oct. 2018 loss to Khabib Nurmagomedov. Yet, when plotting his path to a Moscow rematch with the Russian champion, McGregor insisted that he will return to action in January before setting his sights on the winner of UFC 244’s BMF title bout between Nate Diaz and Jorge Masvidal. After competing for the BMF title, he hopes to rematch Nurmagomedov in the Russian capital.

“I have some news for you all, for the world, here today,” McGregor told the gathered media.

“For me, I wish to compete here in Moscow, Russia. We know that, this is known. We know what bout I am seeking here in Mother Russia, the people of Russia deserve this inevitable rematch to take place here in Moscow and it will happen. However, I am not waiting around for that man [Nurmagomedov]. That man is a known pullout; a known fearer of risk – he does not take risk – so for me, I am not waiting around.”

McGregor went on to announce his Jan. 18 return, but stipulated that he would not reveal the name of his opponent, due to the “crafty” nature of the UFC.

“I would like to announce the return of ‘The Notorious’ Conor McGregor will take place on January 18th in the T-Mobile Arena in Las Vegas, Nevada,” said McGregor.

“So, that is my comeback fight, it’s 12 weeks this Saturday. I’m in prime physical condition, I’ve agreed the date with the company. As far as the opponent, I have the opponent’s name, but for me and the game that I’m in, and from experience, if I was to give you people the name – which I would love to do – I know the UFC would flip it because they are a crafty company. For me, here’s this one, ask the UFC who the opponent is because I do not give a f*ck who the opponent is. January 18th…the return of ‘The Notorious’ Conor McGregor…twelve weeks this Saturday at the T-Mobile Arena in Las Vegas, Nevada.”

“The Notorious” then spoke of his intention to challenge the winner of the BMF title following his return bout.

“That will be the beginning of my season. I will then look to compete against the winner of Nate Diaz and Jorge Masvidal for the Bad Motherf*cker title. Obviously, I have history with Nate Diaz, we are set to have the trilogy bout. We’ll see how that one goes, I feel Nate will get the better of that one and then we will contest the trilogy bout.”

After fighting the winner of UFC 244’s BMF title bout, McGregor hopes to face the winner of Khabib Nurmagomedov vs. Tony Ferguson – a contest that has yet to be booked – in Moscow.

“Then I will seek the Moscow bout and it will be against the winner of Tony Ferguson and Khabib Nurm…Nurmagomedov…I can’t even say the guy’s name…who gives a f*ck what the guy’s name is, but that is the bout that we want. We want this bout in Moscow, the people of Russia deserve this bout to take place, the people of the world deserve this bout to take place. It is an inevitable rematch. It is a rematch that I will come in sharp, fresh [for]. I will have no injuries, I will have no alcohol, I will have no outside influences and I will be fully focused…exactly what the people deserve, exactly what the fans deserve and we will settle it once and for all.”

McGregor launched a scathing tirade at the lightweight champion:

“He is afraid of the Moscow bout for whatever reason. I’m not sure, does he represent Russia? I’m not sure if he does represent Russia. I have never seen the man represent Russia in my life. Have you ever seen the man raise a Russian flag like I raise the Irish flag, with pride? I have never seen it once in my life. He is running from the bout in Moscow. The public want it, the people want it, his own father wants it. He does not want it, he wants to bring a man down to a weight he has never competed at before, even though he himself has almost died making that weight. He is afraid of risk. A man who fears risk will conquer nothing long lasting; there will be no longevity in his career as he does not take risk at all. His last opponent was a former featherweight, which I knocked out in 90 seconds. I knocked that man out in under 90 seconds and it took him three rounds to get the job done. This is an inevitable rematch, we know this, we know it’s happening.”

“That’s it, and that’s what you’re seeing with Khabib, he is running and he is cowering away like he did in Brooklyn when I showed up that day. It’s an inevitable rematch. I will tell him this: you can run, but you cannot hide. You see him last week, or whenever it was, he ran out of the press conference…he scurried out of the press conference here in Moscow. It’s in his nature, but trust me, I am coming for him. But forget him for the minute, like I said, January 18 – the return of a fully focused ‘Notorious’ Conor McGregor will take place in the T-Mobile Arena, Las Vegas, Nevada.”

Check out the full press conference – courtesy of RT Sport – below: