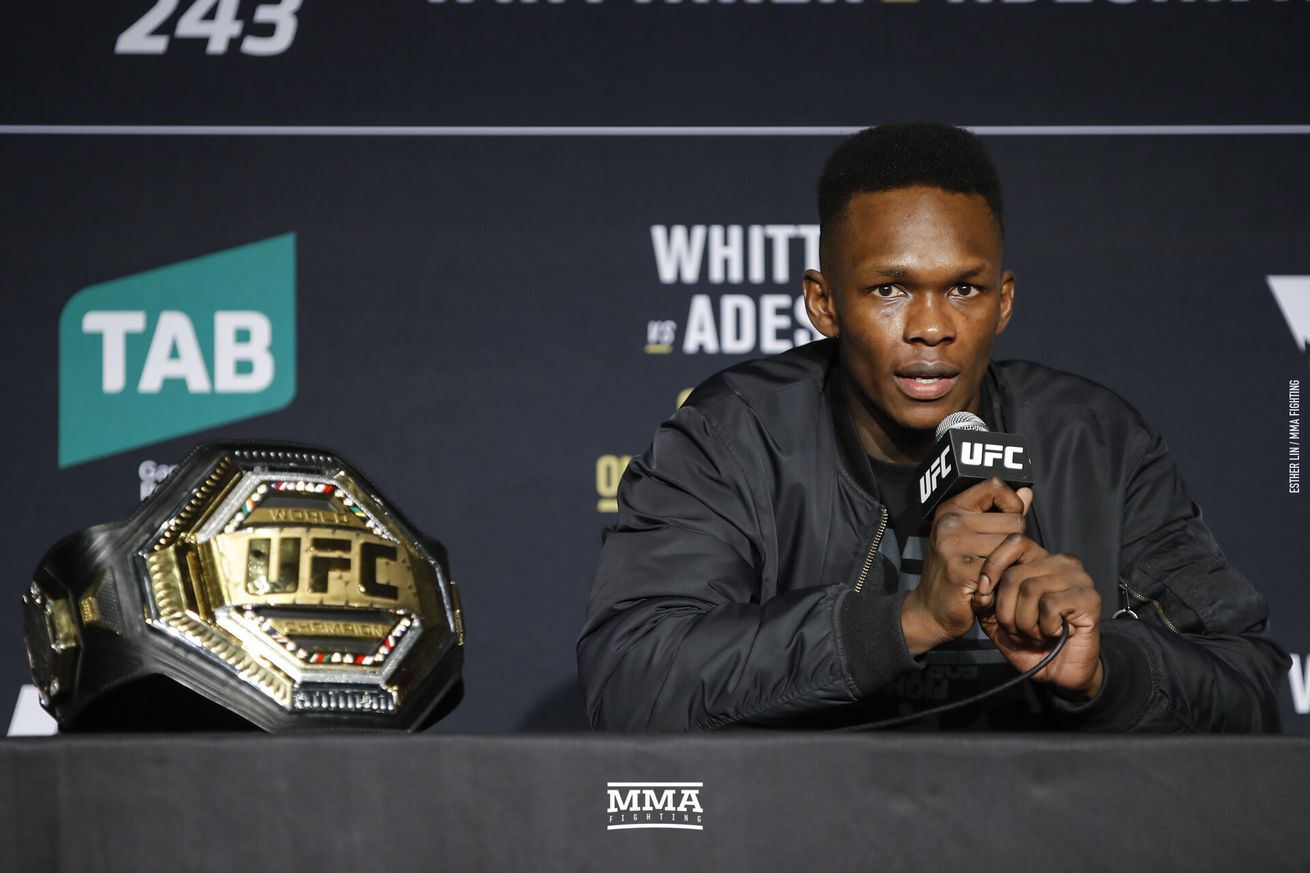 2019 was a phenomenal year for Israel Adesanya. First, defeated Anderson Silva with a Fight of the Night performance at UFC 234. Then he claimed the UFC interim middleweight championship with a win over Kelvin Gastelum in the Fight of the Year. Finally, he won the undisputed middleweight title with a second-round KO of Robert Whittaker. That kind of year resulted in Adesanya taking home Fighter of the Year honors at the end of the year. And now, he can add one more thing to the trophy case.

On Thursday, at Spark Arena in Auckland, New Zealand, (the same venue UFC Auckland will take place next weekend) Adesanya was named the New Zealand Sportsman of the Year at the 57th ISPS Handa Halberg Awards. The event is New Zealand’s pre-eminent honors ceremony for sporting excellence and also serves as a fundraiser for the Halberg Foundation, an organization with the stated purpose “to enhance the lives of physically disabled New Zealanders by enabling them to participate in sport and recreation.” Adesanya is the first combat sports athlete to take home Sportsman of the Year honors, despite the country’s long history of boxing and kickboxing success.

Adesanya delivered a short acceptance speech (video from Sky Sport New Zealand) that paid homage to his predecessors in the combat sports landscape, while also including some of his own personal flair that has helped put Adesanya on the cusp of global superstardom.

✅ An iconic speech from a new Kiwi sporting icon

“Welcome to the party!” New Zealand Sportsman of the Year winner @stylebender‘s Halberg acceptance speech will go down in history. Just watch. #ISPSHandaHalbergAwards

⚠️ Some language may offend pic.twitter.com/fnyCLfgX68

“How long do I have? [Clears throat amid laughter]. It’s the 57th annual Halberg’s. It’s the first time combat athletes have been nominated so you know, I have to do this for the old, the combat athletes of old. Rest in Peace Jimmy Thunder, David Tua, Doug Viney sitting right there, Ray Sefo, Joseph Parker, and now Israel Adesanya.

“Kiwis, we love a good one out. We love a good fight. This is part of the culture. Straight up. We’re a country of a warrior race, the Maori. This is part of our culture. If a fight broke out right now, what would you all do? You’d ignore me and you’d watch the fight. It’s in our DNA. We’ve been doing this for so long, you guys have no idea. Welcome to the party.

“We’ve been doing this for so long. Way back, we’ve been wearing New Zealand on our back all over the world. We did it twice last year in Australia, UFC 234 and 243, me and two of my other teammates, we repeated the three-peat. And guess what, next weekend we have other people coming to our shores at UFC Auckland and we’re gonna defend the land, and repeat the three-peat. Understand this.

“So for me, this really isn’t for me. This is for the young generation coming up who get to see someone they can relate to, someone who is of my essence, if you will. A combat athlete that they can feel like, ‘Man, my sport, like Muay Thai or Jiu-Jitsu or Wrestling is up there with the All-Blacks, the Black Caps, and the Tall Blacks and New Zealand’s top sporting teams. We’re on a level playing field. Like I said, we’ve been doing this for a long time, so this is for them.

“And one more thing I’ve got say: New Zealand we have this f- woo, censorship! Where’s the swear jar? Nah, f*ck it – we have this culture of tall puppy syndrome which is messed up. Coming up in this country, I’ve seen it so many times. When you see somebody rising you want to tear them down because you feel inadequate and you want to call it humble. I am extraordinarily humble, believe me, but you’ll never know that because you never get to know me. Understand this, if you see one of us shining, whether it be the netball team, the Black Caps, the Sailors, pump them up! Embrace them! Because if they win, we win, if I win, you win! Understand that.

“And I know some of you will be a little salty, you might clap but you’re a little salty, but hey, stay salty, the Black Kiwi’s gonna fly all day. Shout out to myself in this mustard-colored jacket and shout out to the guy with the mustard colored face as well. Peace!”

Adesanya doesn’t have time to rest on his newly won laurels though. The middleweight champion is set to defend his title at UFC 248 on March 7th in Las Vegas, NV. against Yoel Romero.

Judging. James Krause questions UFC 247 judging after loss: ‘Your guess is as good as mine’.

Dan Hooker ahead of UFC Auckland.

Put the awards in the bag and nobody gets hurt!! #robbery #blackkiwi pic.twitter.com/8dWCwGJS38

I’m not even in Miami tho

I love how cute you guys Trash talk. How about I make both of you bend the knee on same night! Sincerely your pimp – Triple C https://t.co/ol2F0Dt8H9

Darren Till needs a visa.

@realDonaldTrump
Do me the favour of getting my visa for @ufc 248 so I can fight please.
Surely you can pull some strings!#Please ‍♂️

UFC comin to Oklahoma City May 2?

@ryanhall5050 hey Ryan if no 45er wanna fight u because the rankings diva mentality I’m available just for the cause of being busy.. @ufc oss

Happy Birthday brotha @PetrYanUFC! Let your manager tell Shelby to send us contracts and location for May. We want the fight and I know you do too. Let’s give the fans what they want. pic.twitter.com/2Aq5ljxzon

Thanks! I don’t care about location. All I want is 5 rounds https://t.co/zQfUwe0iGX

Hey @UFC, how’s 5 rounds in OKC looking against @PetrYanUFC?
It’s time we settle who’s the real number 1 contender in this division!
The Funk Bandits are ready.

Tai Tuivasa training at AKA.

Spoke with the manager and I’m not in the ufc anymore. As easy as it would be to give up, I’m going to keep going. I made the changes too late and now i have to pay for that but i have the right pieces in place now. I will continue Hoping and working for the best moving forward.

Congrats Izzy. It was a good speech.

Thanks for reading and see y’all tomorrow.