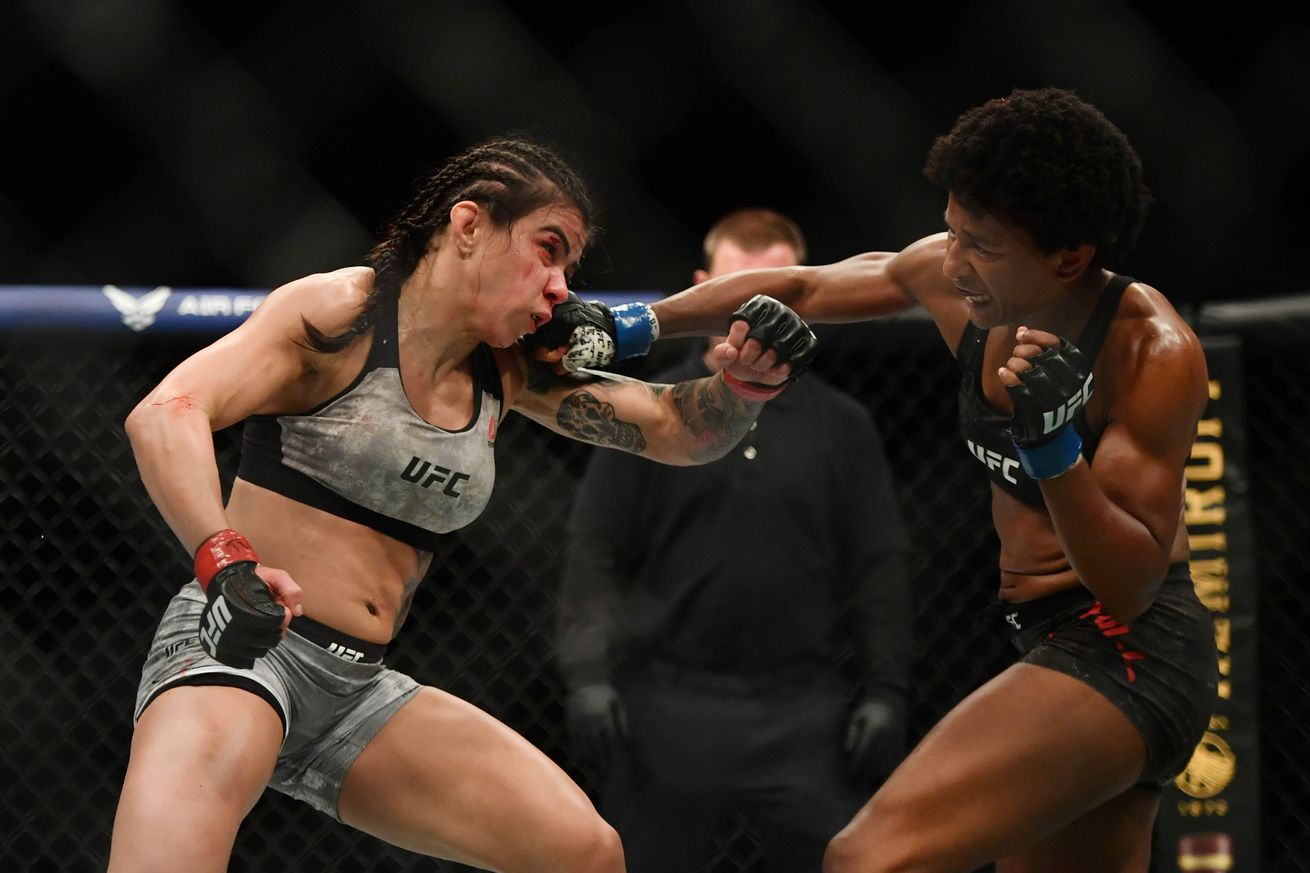 Claudia Gadelha and Angela Hill at a UFC event in Jacksonville, Fla., on May 16, 2020 | Jasen Vinlove-USA TODAY Sports

Few things infuriate MMA fans more than a fight being scored incorrectly, though the term “robbery” tends to be thrown around carelessly and is often steeped in bias. With Robbery Review, we’ll take a look back at controversial fights and determine whether the judges were rightly criticized for their decision or if pundits need to examine their own knee-jerk reactions.

Like UFC 249, the card that happened a week prior, UFC on ESPN 8 had a trio of controversial bouts and the uproar surrounding them was so immediate and loud that we’re going to take a look at all three of them this week.

We’ve already ticked Dan Ige vs. Edson Barboza off the list, so let’s move on to the co-main event between Claudia Gadelha and Angela Hill. Song Yadong vs. Marlon Vera will go under the microscope Monday.

Hill continued her quest to become the “Lady Donald Cerrone” on Saturday, fighting for the seventh time in 14 months. This was more than just a stay-busy fight though as she faced longtime contender Gadelha. A win would move Hill closer to a UFC title shot than she’s ever been, but after a competitive three rounds the scorecards tipped towards “Claudinha.”

For Hill’s thoughts on the call, see below:

Several of Hill’s peers agreed with her reaction.

Warrior , and I feel for you. Judging has been extra disgusting lately

I think @AngieOverkill won that.

I thought Hill won that one too ‍♂️ #UFCFightNight

Damn poor Angie. These fights must look different up close

Are these complaints warranted? Let’s get in the lab and sort it out.

What was the official result?

How did the fight go?

Facing a strong striker with an unorthodox style, Gadelha actually showed a lot of growth in her standup game here. Early on, she wasn’t overcommitting to anything and didn’t force any takedown attempts, even as Hill started to clip her. Still, Gadelha knows how her bread is buttered and after a lengthy struggle against the cage, she took the fight to the mat with about 90 seconds to go. Then it was Hill’s turn to show how much she’s improved as she survived the dangerous ground game of Gadelha with minimal damage.

In the second, Gadelha looked confident staying on the feet with Hill. Maybe she felt she had one round in the bank and that emboldened her. It was a risky strategy and it didn’t pay off as she was cracked by a straight right on the chin that sent her stumbling to the mat. Hill’s corner shouted at her to let Gadelha up rather than dive in, which was probably smart. Halfway through the round, Gadelha went back to her grappling, but ate a knee to the stomach for her troubles. She doesn’t get the takedown.

That failure to convert proved costly. Hill was so light on her feet in this fight, and in round two, she beat Gadelha to the punch on multiple occasions. After eating a couple of good short rights, Hill varied her attacks to get Gadelha off-balance again. It was one-way traffic in the last minute of round two and Hill finished strong. Taking into account the knockdown, it looked like this one was going to come down to the third round.

The length and counter-punching of Hill gave Gadelha problems in round three. You could see Gadelha’s punches beginning to fall short. To Gadelha’s credit, she responded with hard shots of her own, staying with Hill in the pocket and mixing in leg kicks nicely. Hill was making Gadelha miss, but when Gadelha landed you could see Hill take a step back. Gadelha even tossed in a Mirko Cro Cop shove. However, Gadelha missed a lot too, and if you were adding style points, one could see how Hill’s performance was more appealing.

We went to the judges with both women feeling confident about their chances.

What did the judges say?

All three judges agreed that round one belonged to Gadelha and round two to Hill, leaving the 10-9 scores Lee and Tirelli gave to Gadelha in the third as the difference.

What did the numbers say?

The good news for Gadelha is that the significant striking numbers are fairly close and she took the most definitive round of the fight. The bad news is that the numbers also say she was clearly out-struck on the feet.

Gadelha won the first round 21-10, with four of those significant strikes scored on the ground. Hill won round two 37-29 and round three 43-34, and if you’re just looking at the standup exchanges, she landed 90 significant strikes to Gadelha’s 80 in total.

The lone takedown was Gadelha’s in round one, while Hill recorded the lone knockdown of the fight in round two. At the risk of sounding overly reductive, these turning points accurately tell the story of the first two rounds.

Hill pulled away with the body work, landing 29 strikes to the midsection compared to Gadelha’s 14. Gadelha actually had the slightest edge in head strikes (61-60) and a significant one in leg kicks, beating Hill 9-1 in that category. Given that fights are scored round by round, it’s worth noting that Hill had more head strikes in rounds two (25-22) and three (31-25).

What did the media say?

What did the people say?

Only two scores really registered with voters on MMA Decisions, and 29-28 Hill was far and away the top result garnering 73.5 percent of the vote as of this writing. In second, 29-28 Gadelha was favored by 24.4 percent of voters (if you want to factor in the next two highest votes, both scores for Gadelha, then it pushes her support to just under 26 percent).

Voters on the Verdict MMA app echoed the judges’ sentiment through the first two rounds, but deviated in the third to give Hill the win.

That scoring system takes the cumulative total of every submitted fan score (filtering out aberrant scores like random 10-7s if they comprise less than one percent of the total) in every round and divides by the amount of submitted scores to determine the winner of each round and also in totality.

Gadelha’s ground control gave her a full 100-point win in round one, but Hill’s second was almost as dominant as she won by an 87-point margin. The third round was much closer, but also scored for Hill giving her a two rounds-to-one advantage and a narrow 31-point win.

In MMA Fighting’s own poll that asked for thoughts on the decision, 65.3 percent thought Hill was the victor.

Buckle up, we are going to the judges again! Who’d you score it for? #UFCFL

How did I score it?

Let me first state that I am a fan of “K-1 Claudia.” She showed legitimate advances in her striking after relying on her athleticism and power earlier in her UFC career. That loss to Nina Ansaroff was a wakeup call and it’s great to see her evolving into year 12 of her pro career.

It’s really all about how one saw the third and that was a 10-9 Hill round for me. Gadelha was the busier fighter throughout most of the bout, but she looked less efficient as the fight went on and that’s reflected in the stats as she landed 44 percent of her significant strikes in round one, 40 percent in round two, and 36 percent in round three. Hill trended in the opposite direction, starting at 38 percent, improving to 51 percent, and then landing 55 percent of her significant strikes in the third, all while increasing her output.

Even without that data, Hill’s poise and accuracy stand out with a cursory review of the fight. She may have allowed herself to be visibly affected one too many times by some of Gadelha’s harder shots, which likely influenced the judges. Still, Hill wasn’t significantly hurt in my eyes, so I’m sticking with my scorecard.

Was it a robbery?

Yes, and here’s why.

Look at those striking numbers again. Hill won the second round by eight significant strikes and all three judges were on the same page in giving her a 10-9. She wins the third round by nine significant strikes, landing more in total than she did in round two and with better accuracy, but the judges gave the last 10-9 to Gadelha.

Now look again at the fighter and fan reactions above. These numbers corroborate the initial eye test.

Obviously, the knockdown in round two made the scoring much easier, but still, the question of consistency remains: How could Hill win the striking battle by a greater margin in round three than in round two and still lose the last round?